Miranda summarizes how to play Witchstone by R&R Games and provides some afterthoughts on the game from herself and coworkers.

A few months ago, I sat down with Rob, Chino, and Jae to play Witchstone by R&R Games. It was shortly after returning from PAX Unplugged 2021 in Philadelphia where I found this game and decided to bring it back to the store to share with my coworkers.

Witchstone by R&R Games is a beautifully designed strategy game for 2-4 players. The story’s premise is that every year, witches and wizards will gather at the Witchstone, and this year, you want to become the most powerful witch. Witchstone is a game in which there are multiple paths to victory, but you must be discerning, because not all options will always be readily available to you. Each player will choose a color (red, blue, green, or yellow), and then the game begins.

The player who most recently stirred a pot will take the first action, but before that, the player to their right will start off by placing their big witch meeple on a tower of their choice. Then all players will choose a tower in reverse order, with Player 1 placing their witch last since they are taking the first action. 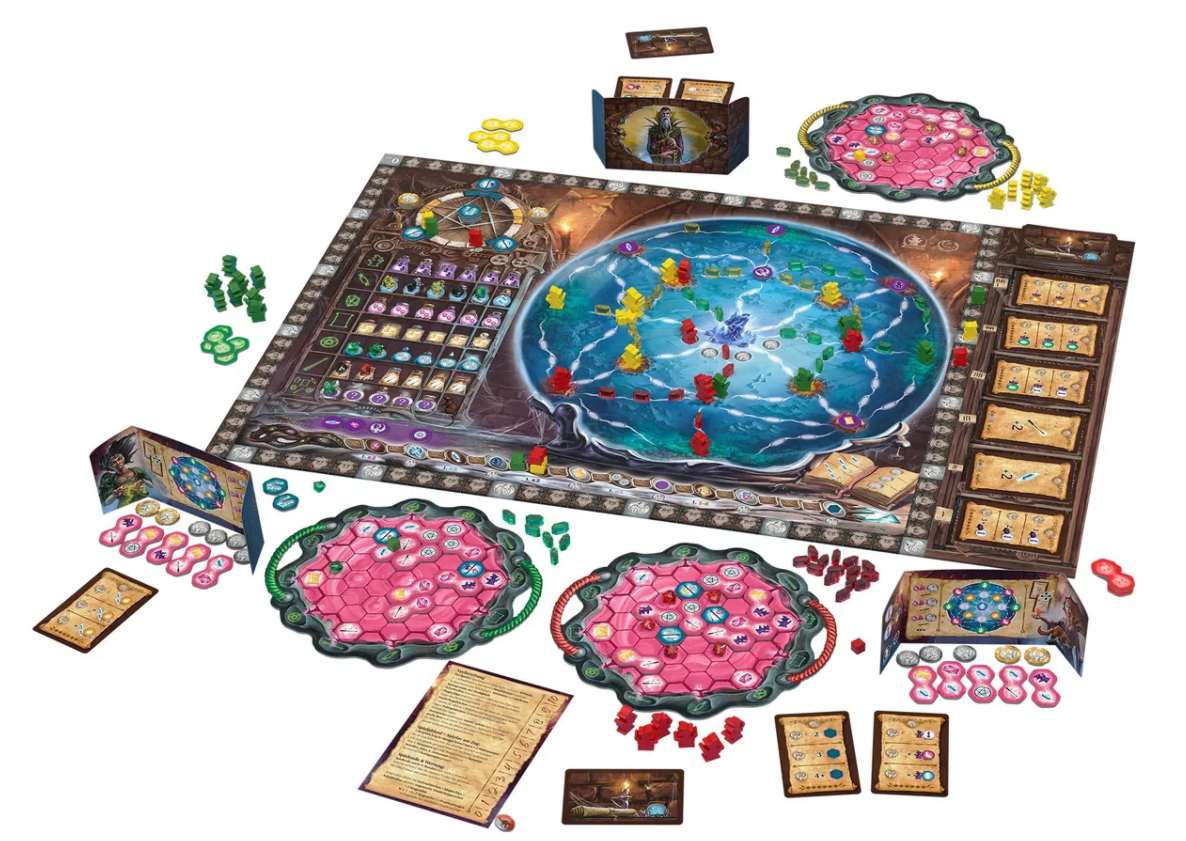 Each player will take their pile of double hex tiles and flip five of them over face up behind the player partition. These should be visible only to the player and hidden from opponents. These double hex tiles will determine the actions each player may take on their turn. The first hex tile should be placed adjacent to one of the pre-printed designs on the cauldron so that the images create a chain.

There are six different actions players can take in the game to earn victory points.

1. The game will begin with six colored crystals on each player’s cauldron, plus one black crystal on each as well. Taking a single crystal action will move one of your crystals one space. 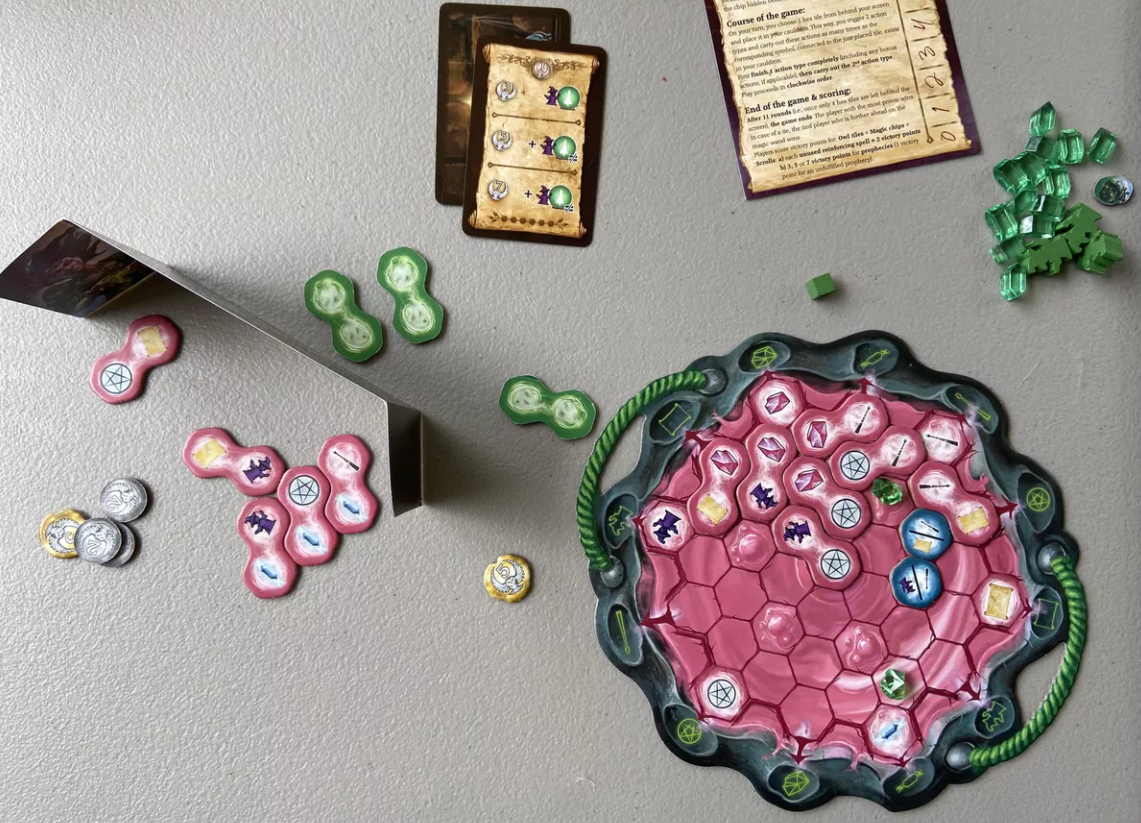 You want to get your crystals out of the cauldron for two reasons: one, so you can place more hex tiles, as you cannot place them atop crystals; and two, because each time you get a crystal out of the cauldron, it gets placed in a jar on the shelf (see lower half of below image), which allows you to take additional actions depending on which space your crystal left the cauldron. Black crystals count for double the actions!

2. A pentagram action allows you to move your meeple one space along the pentagram track (see upper half of image left). Lapping the track will earn you victory points and special hex tokens that you can use for either an immediate reward or in your cauldron for better action chaining. 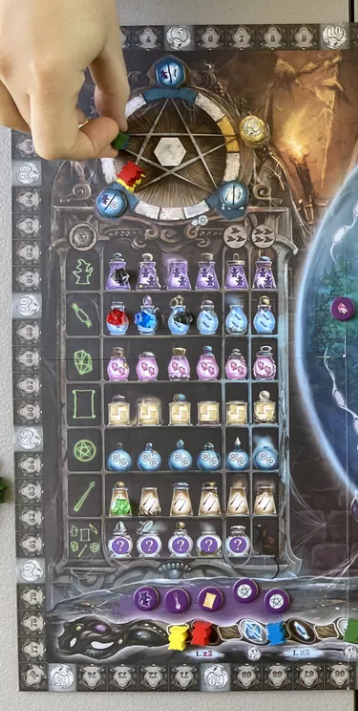 4. Energy actions allow you to place gems on the board to build leylines starting from your tower and moving across the board. Leylines are comprised of either one, two, or three energy gems, and will net you one, three, or six victory points upon completion respectively.

Once you’ve completed a leyline, your witches can move freely from one location to another as a single action as long as it is a leyline of your color. If it is not your color, moving a witch along it will cost you one action per energy gem on the leyline. 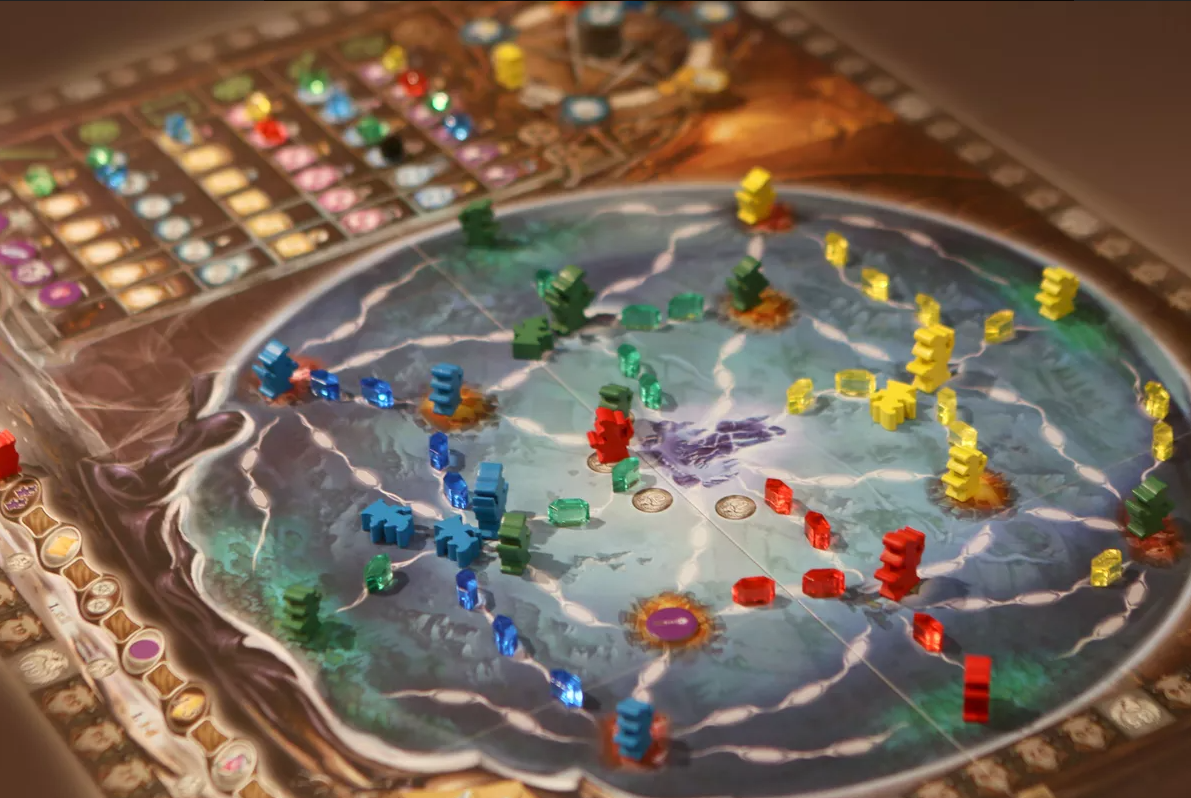 5. Witch actions can score you small amounts of victory points just by standing up your witches, but in the end-game, having witches in many locations can prove to tip the scales. When you move a witch to a location that has a purple token on it, that means you immediately take the action on that token and keep it for two victory points at the end of the game. Witch actions entail: placing a witch on your tower lying down; standing a witch up (earns you 2 victory points!); moving a witch either one energy gem space, or if you’re utilizing a leyline of your own color, from one location to the next. 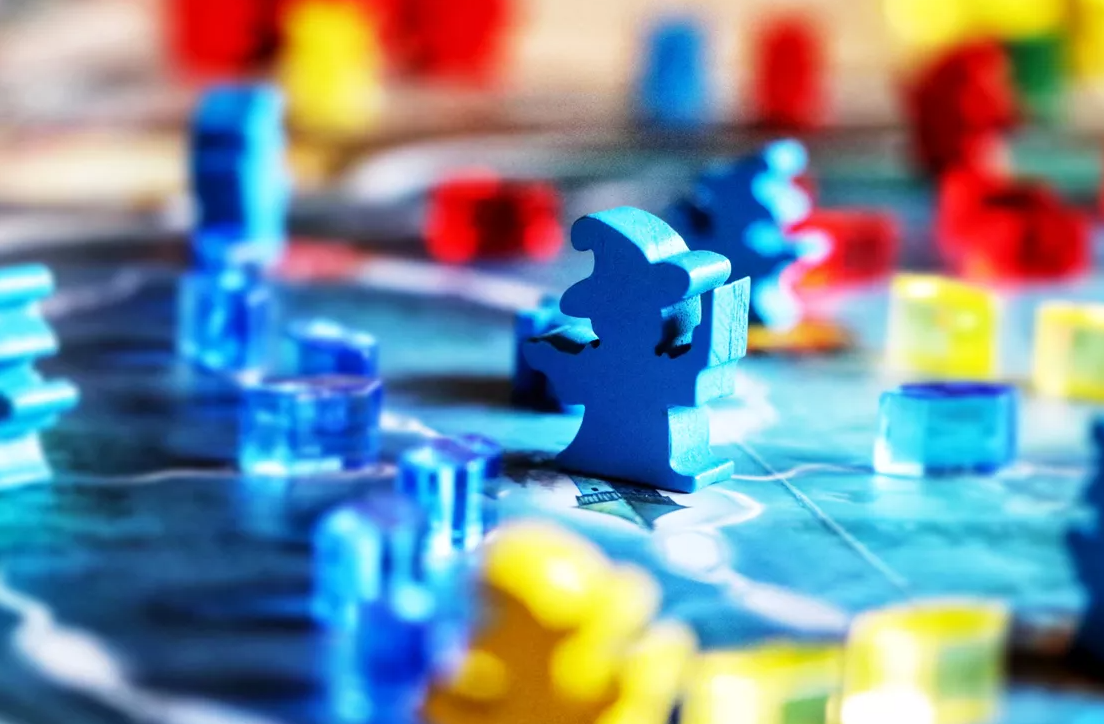 This action is especially important for end-game victory points, so chaining scroll actions in your cauldron to expand your options for scroll choice is very beneficial.

There are two types of scrolls, action scrolls and prophecy scrolls. Action scrolls simply allow you to take additional actions of a certain type on later turns. Prophecy scrolls give you victory points at the end of the game if the prophecy on the card applies to you by the time you’re tallying points.

Once each player has taken their eleventh turn and only has four double hex tiles left, the game ends and players will count up their points. In addition to the points scored during the game itself, you now add the points scored from the following: purple tokens, pentagram track tokens, prophecy scrolls, and any unused action scrolls.

As is the case with most board games, the player with the highest total points is the winner.

After sitting down to play this game with Chino, Jae, and Rob, we all discussed what we liked and disliked about the game.

One feature of the game that all of us agree is great is that there are so many ways to score points in this game. Rob had mentioned it reminds him of Great Western Trail in that respect. It allows all players a pretty fair shot at scoring points while simultaneously allowing each player multiple options to do so without directly sabotaging another player. (Definitely makes for a lot less hurt feelings than playing, say, Monopoly.)

Having all these options for scoring points requires a certain degree of strategic planning, which is the second thing we all found that we enjoyed of Witchstone. We quickly discovered that the best strategy seemed to be to go hard into one or two action types and have a backup in case you get pigeonholed out of one of your choices. In regard to placing your hex tiles in the cauldron, it was truly imperative to plan ahead or else fall behind; as seasoned tabletop gamers, we appreciate that level of complexity in a game, especially when well executed. In fact, the only instance of luck in the game really appears to be what double hex tiles you draw and when, but even then, it’s more about how you utilize the hex tiles you have.

Lastly, in terms of aesthetics, the game pieces in Witchstone are really beautiful. We spent a good few minutes oohing and aahing at the gems and crystals and other shiny, colorful bits. 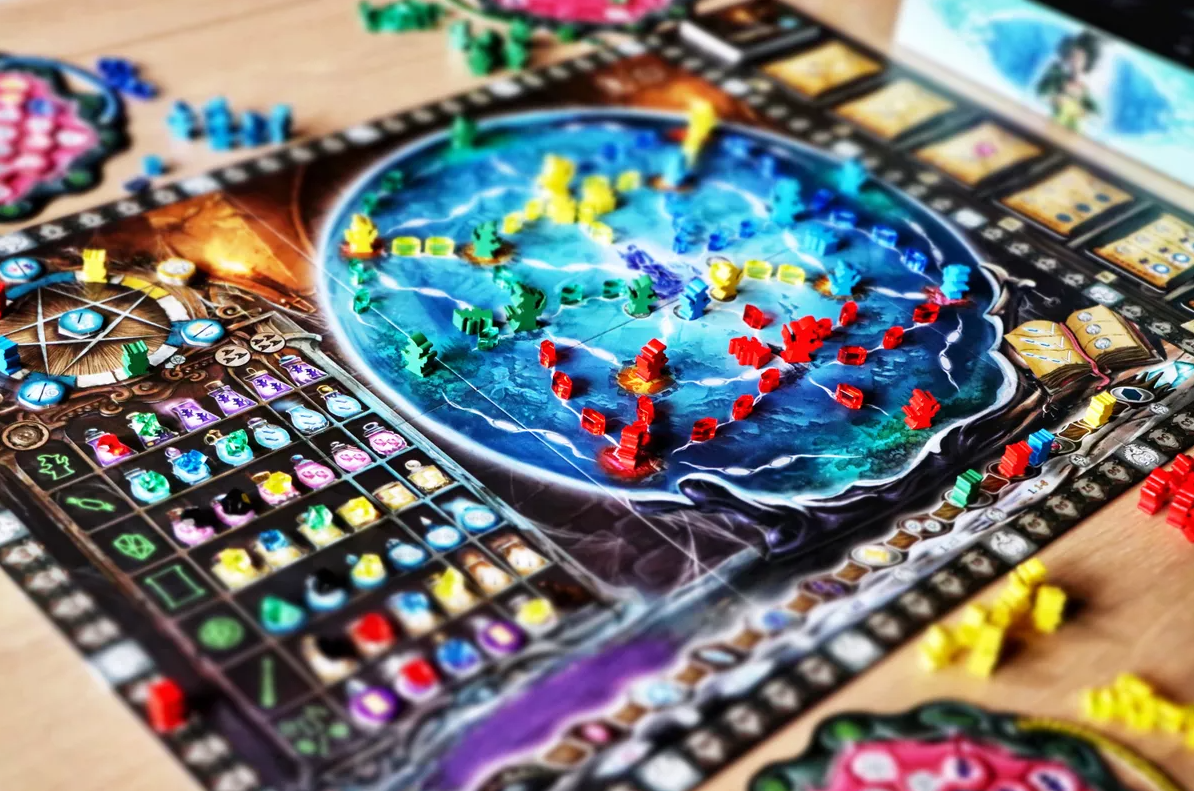 What We Thought Could Be Improved:

One thing Jae had mentioned bothered him about Witchstone was that some of the mechanics in the game did feel a little forced–I personally am inclined to agree with this statement. For example, none of us really understood why the magic wand track was crucial to the gameplay; we all felt the game would have been more or less unchanged without it. Aside from mechanics, there did seem to be a bit of disconnect too between parts of the game and their usefulness. I was excited to see animal familiar tokens when setting up the game for the first time but was then later disappointed when I realized their only purpose is to track rounds.

We also found ourselves wondering toward the end of the game, why is this game called Witchstone? The witchstone is a location on the board which players can minimally interact with, but you’d think the namesake of the game would have a bit more presence in gameplay other than just accruing a few extra points.

Lastly and most glaringly, we all had complaints about the instruction booklet. This instruction booklet needs quite a bit of work. Many parts of the rules were poorly explained, and some parts weren’t explained at all. In some instances, we needed to make up house rules because we couldn’t find a proper explanation, and because this game is still fairly new, helpful online FAQs are still a bit hard to come by. 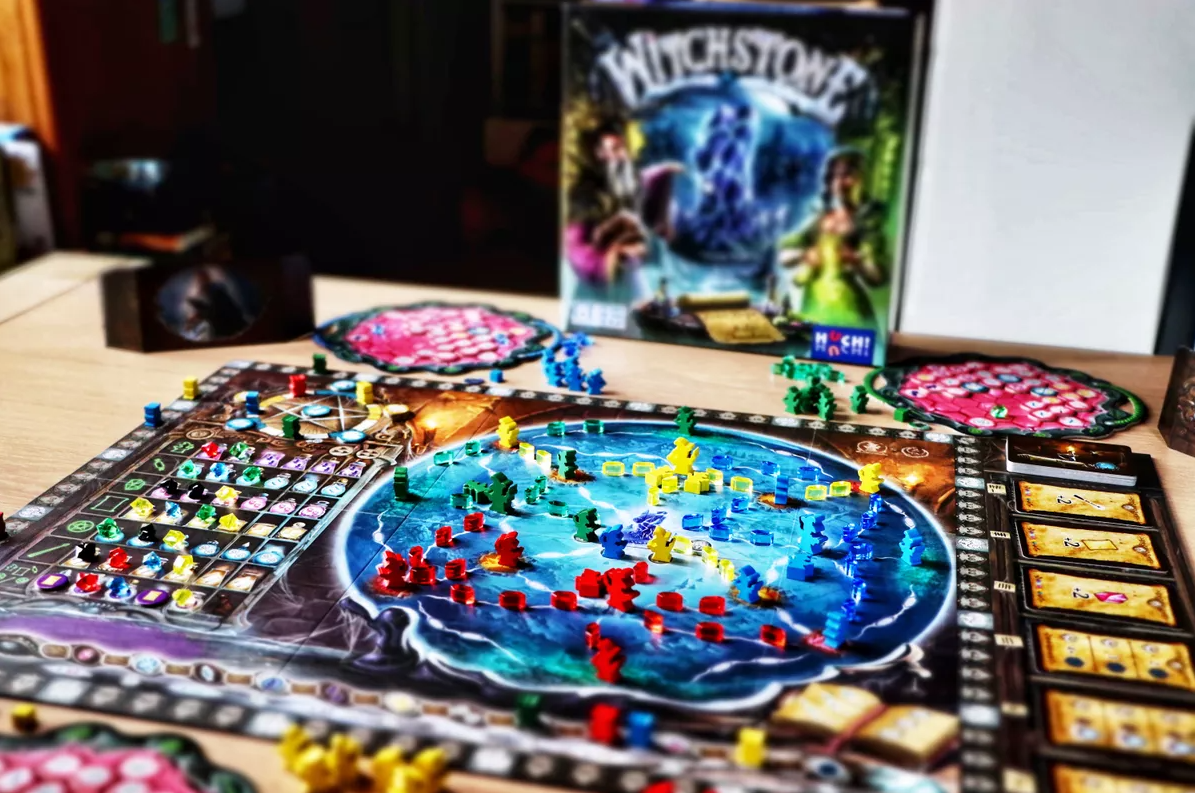 Overall, we all enjoyed playing Witchstone. It was my favorite game from PAX Unplugged this year, so I was very excited to finally sit down with my friends and try playing it outside a demonstration setting. I love seeing witchcraft incorporated into games, as it’s such a broad and versatile subject with so much to offer for interactive gameplay. Other titles I’ve enjoyed with this theme of witchery are Abracada…What?, Quacks of Quedlinburg, and Whirling Witchcraft. I’ve since added Witchstone to my personal collection and hope to introduce it to more friends. I’d also be interested in seeing if R&R pursues any expansions for this title. I could see potentially a larger board allowing for another two players to join, and maybe some additional locations on the map. Otherwise, I’ll be keeping an eye out to see what other games R&R comes out with.

For the future, what other tabletop games would you be interested in reading about? Of course this isn't limited to just board games either! Do you like having these explanations of the rules, or would you prefer more of a critical analysis/thought piece? Sound off in the comments below to let us know!